CALGARY, Alberta, Oct. 13, 2022 (GLOBE NEWSWIRE) -- LithiumBank Resources Corp. (TSX-V: LBNK) (OTCQX: LBNKF) (“LithiumBank” or the “Company”) is pleased to announce that the hydrogeological study and well network design at the 100% owned Boardwalk Lithium Brine Project, located in west-central Alberta, has been completed. “The exceptional flow rates at Boardwalk as determined from this study are one of the most critical factors that contribute to the economics of the NI 43-101 Preliminary Economic Assessment that is nearing completion” stated Rob Shewchuk, CEO.

LithiumBank engaged GLJ Ltd. and Fluid Domains Inc. to conduct a hydrogeological study and well network design as part of the Boardwalk Preliminary Economic Assessment (the “PEA”). The study area for the PEA shown as the “Production Zone” in Figure 1 is where the majority of past oil and gas production occurred within the Leduc Formation since the 1960’s. This area was selected because of its past production history providing down hole data from over 400 wells (of the over 550 in the Leduc) and lithium and multi-element assay analysis from 40 of the overall 65 wells within the Leduc Formation.

The hydraulic characteristics indicate that the Leduc Formation at Boardwalk is favourable for high volume, long-term production of the lithium-rich brine. The hydrogeology and well network design to be used in the PEA considers a 20-year period of production and is capable of a daily production rate of 250,000 cubic metres of brine. The production zone consists of approximately 25% of LithiumBank’s Mineral Permits in the Leduc Formation at the Boardwalk project where LithiumBank has 100% of the mineral rights.

The well network is designed to have multiple wells from each well pad. Multi-well pads will minimize surface disturbance and reduce unnecessary infrastructure between wells and the Direct Lithium Extraction (DLE) facility. This strategy benefits the environment and reduces upfront capital expenditures.

The proposed multi-well brine production pads will also be utilized to reinject brine that has been processed through the DLE facility (barren brine) into disposal wells. Disposal of the barren brine will be reinjected into multiple formations, other than the Leduc, that lay stratigraphically above the Leduc as well as below the Leduc. Reinjecting barren brine into formations other than the Leduc will eliminate any possibility of diluting future lithium resources and mitigating capital expenditures when considering moving lithium depleted brine over any distance. Figure 2 illustrates a simplified x-section of the lithium brine extraction and disposal.

The information reported by GLJ and Fluid Domains will be incorporated into the PEA that is being led by Hatch Ltd. LithiumBank engaged Hatch Ltd. (see news release dated July 19, 2022, https://www.lithiumbank.ca/news/2022/ithiumankngagesatchtoestoardwalkithiumrinei20220719050301) to complete the PEA and is working closely with the leading engineering firm to continue to advance the report forward as it nears completion.

Rob Shewchuk, CEO states, “We are very pleased to see such strong technical support for Boardwalk indicating the necessary reservoir parameters required to sustain a sizable lithium-brine project over a long period of time. A project of this magnitude has the potential to be a meaningful contributor to the global supply of lithium that continues to be challenged by a supply side imbalance. Growth in demand for lithium is expected to continue to be very strong through the coming decades in an era of rapid electrification. The comparatively small footprint and ESG friendly development of Boardwalk, when compared to traditional hard rock and salar lithium mining projects, could provide an opportunity to produce battery grade lithium at scale and in a sustainable manner that we believe has excellent alignment with the broader environmental and sustainability initiatives that are currently being emphasized and supported across resource development industries globally.” 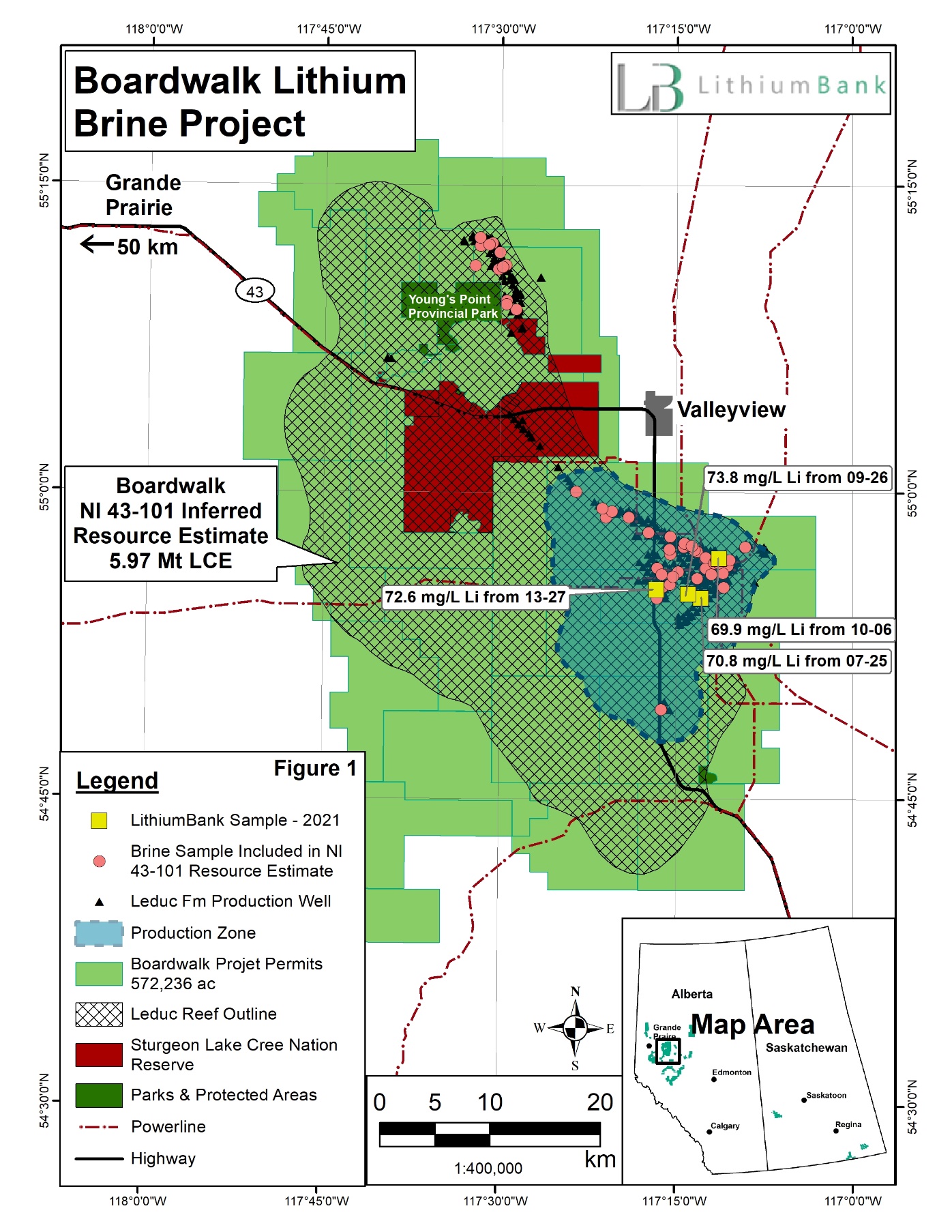 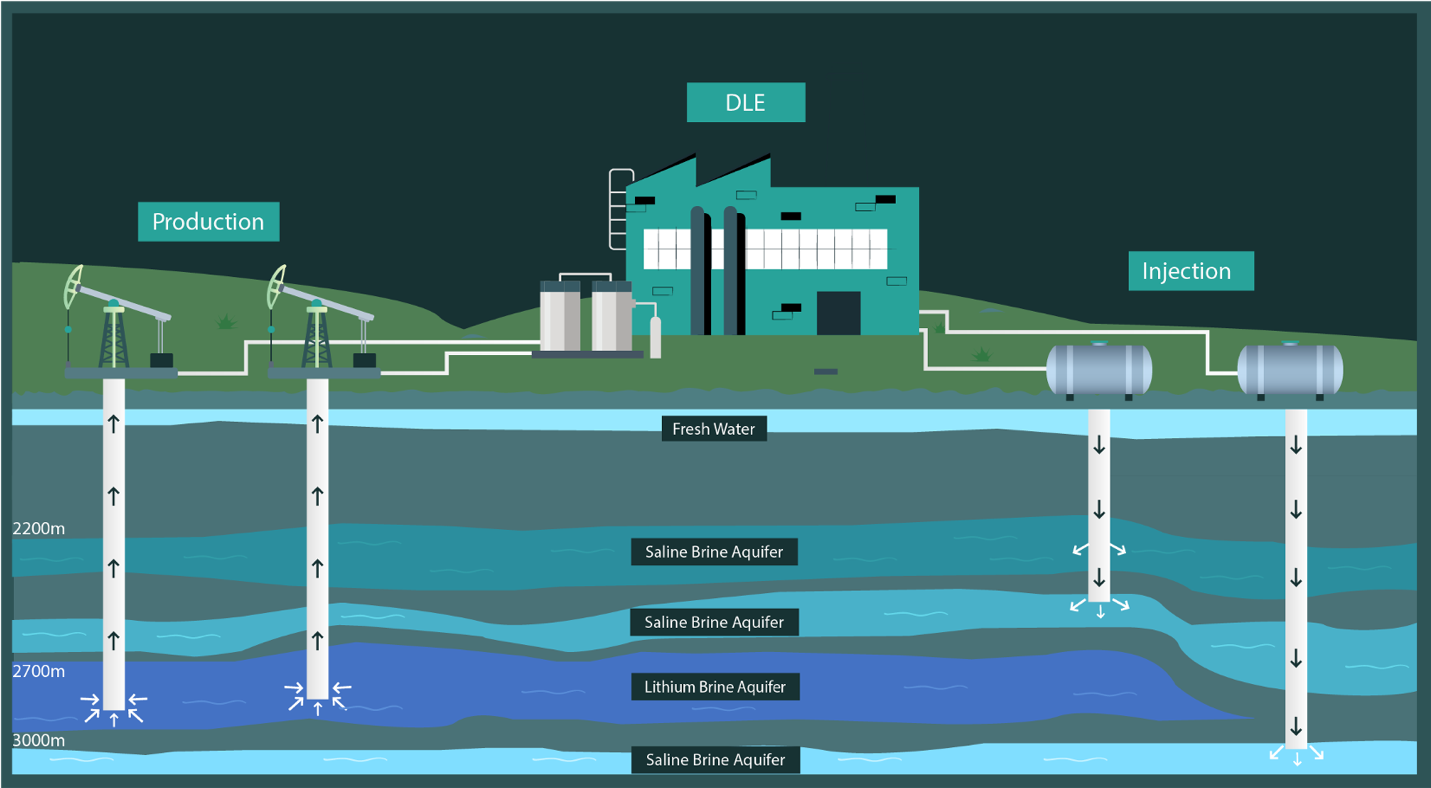 The Boardwalk (formally Sturgeon Lake) Leduc Formation Li-brine inferred resource, with an effective date of May 18th, 2021, is globally estimated at 1,122,000 tonnes of elemental Li at an average lithium concentration of 67.1 mg/L Li in 16.7 km3 of formation brine volume (Table 2). The global (total) lithium carbonate equivalent (LCE) for the inferred mineral resource is 5,973,000 tonnes LCE at an average grade of 67.1 mg/L Li (as reported in LithiumBank’s news release dated May 31, 2022).

Mineral resources are not mineral reserves and do not have demonstrated economic viability. There is no guarantee that all or any part of the mineral resource will be converted into a mineral reserve. While bench-scale, and demonstration pilot plants operated by companies other than LithiumBank are reportedly having success in the recovery of high purity battery-grade lithium from subsurface confined aquifers, DLE technology is in the development stage and has not yet been proven at commercial scale.

Note 1: Mineral resources are not mineral reserves and do not have demonstrated economic viability. There is no guarantee that all or any part of the mineral resource will be converted into a mineral reserve. The estimate of mineral resources may be materially affected by geology, environment, permitting, legal, title, taxation, socio-political, marketing, or other relevant issues.
Note 2: The weights are reported in metric tonnes (1,000 kg or 2,204.6 lbs).
Note 3: Tonnage numbers are rounded to the nearest 1,000 unit.
Note 4: In a ‘confined’ aquifer (as reported herein), porosity is a proxy for specific yield.
Note 5: The resource estimation was completed and reported using a cut-off of 50 mg/L Li.
Note 6: In order to describe the resource in terms of industry standard, a conversion factor of 5.323 is used to convert elemental Li to Li2CO3, or Lithium Carbonate Equivalent (LCE).

The scientific and technical disclosure in this news release has been reviewed and approved by Mr. Kevin Piepgrass (Chief Operations Officer, LithiumBank Resources Corp.), who is a Member of the Association of Professional Engineers and Geoscientists of the province of BC (APEGBC) and is a Qualified Person (QP) for the purposes of National Instrument 43-101. Mr. Piepgrass consents to the inclusion of the data in the form and context in which it appears.

LithiumBank Resources Corp. is an exploration and development company focused on lithium-enriched brine projects in Western Canada where low-carbon-impact, rapid DLE technology can be deployed. LithiumBank currently holds over 3.77 million acres of mineral titles, 3.44M acres in Alberta and 326K acres in Saskatchewan. LithiumBank’s mineral titles are strategically positioned over known reservoirs that provide a unique combination of scale, grade and exceptional flow rates that are necessary for a large-scale direct brine lithium production. LithiumBank is advancing and de-risking several projects in parallel of the Boardwalk Lithium Brine Project.

Photos accompanying this announcement are available at: